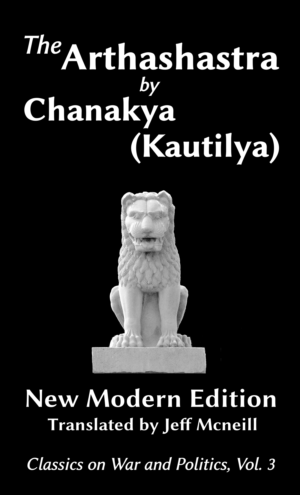 The Arthashastra -- "The science of politics and political economy" -- is an extended treatise on how to found and rule an empire. Max Weber declared that compared to the Arthashastra, Machiavelli's "The Prince" is harmless.

The author Chanyaka (also known as Kautilya) was the masterful advisor to ruler Chandragupta Maurya, the founder of the Mauryan empire, one of the greatest our world has ever seen.

Rediscovered by R. Shamashastry in 1905 among a large collection of Sankrit palm-leaf manuscripts, the Arthashastra was published in Sanskrit in 1909 and the first English translation published in 1915.

For a new work that would be more accessible, it is important to revisit the translations of Shamashastry and Kangle, and to reconstruct a new modern edition that remains true to the original.

While the works of Shamashastry and Kangle are excellent for Sanskrit scholars, their translation into English are not fully formed, and for a non-Sanskrit reader, difficult to follow.

Rangarajan's however is too transformed, to remain as true as possible to the original.

Olivelle's is an exceptional edition, however again there is much reliance on historical expertise, and the use of annotation gets in the way of a straightforward and forthright version that is easily readable.

Improvements for readability, clarity, and concision are needed, and are now available in this new modern edition.

For Paperback and Ebook, The Arthashastra by Chanakya (Kautilya) is available exclusively through Amazon and Kindle stores. We have not finalized an Audiobook distributor just yet.

Short URL to this page